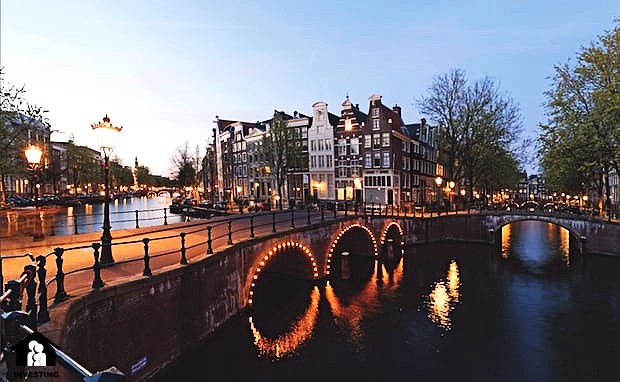 Amsterdam lives and breathes through water.

The city was built around a complex network of canals that flourished thanks to trade, wealth and art at the end of the European Renaissance. However, over the past two decades, it has come to be perceived as something of a haven for entertainment – the European equivalent of Las Vegas.

But amid the crowds, bikes and noise, you can clearly see the municipality's efforts to revive the lasting cultural heritage of the medieval seaport through the waters that permeate the city.

Among them, the State Museum of the 19th century - the city's answer to the Louvre - as you know, has undergone large-scale transformations in 10 years, costing $ 5,500 million. Reopened just three years ago, it now stands as a monument to the glorious history of the country's art; the Gothic and Renaissance architecture has been restored in accordance with the masters of the Dutch Golden Age Vermeer and Rembrandt.

With 8,000 exhibits scattered across 80 halls, visiting the State Museum is exhausting, but art and history lovers can easily spend the whole day enjoying some of the most exciting exhibits in the world. Fortunately, there are more than enough places to relax in the museum and its surroundings, including picturesque gardens where historical and modern sculptures are conveniently located among neatly equipped flower beds.

Across the lawn from the Grand State Museum is the Van Gogh Museum, which houses the world's largest collection of extensive works by the artist. Located on three floors, the collection demonstrates the self-taught genius's early observations of rural life in "Potato Eaters" through his major masterpieces, including "Sunflower" and "Bedroom".

The paintings are permeated with extensive biographical details, excerpts from Van Gogh's letters to his beloved brother Theo and the works of his contemporaries who inspired him and helped develop his talent.

Intertwined with explosions of brushstrokes, color and creativity, the dark period precedes the infamous self-mutilation and tragic suicide of Van Gogh at the age of 37.

If your artistic desires remain unsatisfied even after completing these two levels, you don't need to travel far to get more cultural shows in Amsterdam. Next to the State Museum and the Van Gogh Museum is the Stedelijk Museum, which houses a number of galleries containing 20th-century works and some of the latest trends in contemporary art.

You can also rent a bicycle - the easiest way to get around the city - and visit the Amsterdam Hermitage Museum, where treasures borrowed from the Hermitage Palace in St. Petersburg are on display, or visit the house of Rembrandt himself, where he lived in relative grandeur at the peak of his success in 1640.

However, if there is one attraction in the city that cannot be missed, it is the Anne Frank House, a secret annex where a Jewish teenager and diarist hid with her family from Nazi persecution during World War II.

They are accessed behind the same bookcase that covered the secret entrance for two years, and the small rooms in the attic still seem as closed and stuffy as it must have been with its seven inhabitants during their stay underground. Although there is no furniture, small details remain intact, such as darkened windows and postcards with a picture of a movie star on the wall of Ann's bedroom.

Another level, no less exciting, remains when you leave the attic of the museum, where the original scraps of colored paper on which Anne wrote her famous diary 70 years ago are hidden behind a glass panel.

Scattered around the walls of the house are quotes filled with Anne's hopes and dreams, as well as amazing human insights that may allow visitors to see some important moments of what is a powerful, moving, but ultimately heartbreaking experience.

However, Amsterdam's historical heritage is not limited to museums. You can also try new dishes on the culinary scene of the city. Moroccan and Turkish restaurants can now be found in abundance, from backyard kebab chains to more upscale establishments such as mamouche in the de Begep district.

Indonesia's Dutch colonial past has led to the fact that the gastronomic scene of Southeast Asia has spread throughout the city, which means that you should not miss the opportunity to taste the luxurious regionaville.

Created especially for the Dutch colonists, this dish consists of many small spicy dishes served with rice and seasonings. With a devilish taste and a more than satisfying taste, we would choose tojo Marit, near Waterluplein, or the favorite local dish Blau, located on the outskirts of Vondelpark. The park itself is something of a diner, serving as a very popular barbecue place for the townspeople.

At the top of the culinary scene is the elegant coastal restaurant I dock, where visitors can enjoy a Mediterranean menu of fresh seafood and a wide selection of shared dishes while admiring the view of Amsterdam's vast former shipping dock. As the name suggests, this area was once the center of the city's extensive maritime trade for the past four centuries.

Transformed into a world-class marina, the large windows of the I-dock overlook a chic terrace with luxury boats moored on the water. Along with the preserved old red brick ship houses, it is here that you see a new legacy emerging in Amsterdam's history; something that rustles and is elegant, but always remains rooted and tied to the water.